There is a simple game called 20,000 Light Years Into Space. It’s open source and easy to install on Linux with a few simple clicks on my desktop’s Mint distribution. Basically, you race to upgrade your city while keeping it supplied with enough steam to support its ever growing demands. Of course, sandstorms, alien ships, and earthquakes are constantly breaking pipes and it’s a constant struggle to keep growing and maintaining the network.

I don’t know why I am so hooked on this game. But I have noticed that I can listen to a book and still play it, the overlap between these two parts of my brain are minimal. This is one of the rare cases where multi-tasking really is possible.

This game is frustrating, the bad things that can go wrong are immensely destructive, the steam vents that need to be harvested are randomly placed at the beginning of each game, and the network elements don’t act exactly as you think they should. I spent quite a lot of time building ‘test’ networks on peaceful mode to see what configurations were most effective.

I’ve been playing this thing off and on for 6 months, a good time killer for when just sitting and listening to an audio book while blankly staring into space just feels weird. A nice thing to do with my hands and eyes. But I could never crack 3000 points. Hell, sometimes I couldn’t crack 2000.

There’s no multi-player league for this game. There’s no place, that I can find, where players of this game congregate and share tips and strategies, no leader board. In the purest form, I have been competing against myself. And I cracked 3000. I don’t even know if this is a good thing. It FEELS good, but there’s no objective measuring stick, here.

Even without the leader board, I wanted to share my very small triumph. So, “Hurray!” 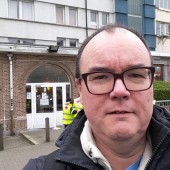 All stories by: richard
A Workplace Tragedy in 6 Panels
Terry Pratchett